The second volume of a titanic masterpiece of twentieth-century literature, named one of the best books of 2019 by The New York Times critics.

Beginning in August 1967 and ending in August 1968, Uwe Johnson’s Anniversaries unfolds the story of a year in the life of Gesine Cresspahl, a German émigré living in New York, and her ten-year-old daughter, Marie, a year during which Gesine tells Marie her own story of growing up under the Nazis and during and after World War II in a small north German town near the Baltic Sea. Comparable in richness of invention and depth of feeling to Joyce’s Ulysses and Proust’s In Search of Lost Time, Anniversaries is one of the world’s great novels. Anniversaries, Volume 2 begins on April 20. Before long Marie will be devastated by the assassination of Robert F. Kennedy, even as the news of the Prague Spring has awakened Gesine’s long-dashed hopes that Socialism could be a humanism. Meanwhile, her boss at the bank has his own ideas about Czechoslovakia, and Gesine faces the prospect of having to move there for work. Continuing the story of her past from Anniversaries, Volume 1, Gesine describes the Soviet occupation of her hometown, Jerichow, where her father was installed as mayor and ended up in a brutal prison camp. Gesine herself charts a rebellious course through school, ever more bitterly conscious of the moral ugliness of life behind the Iron Curtain. As the year of the novel comes to its end, past and present converge and the novel circles back to its beginnings: Gesine tells Marie about her father, Jakob, dead before she was born, about leaving East Germany, and, as history threatens to take them away from New York, about the beginning of their life together in the city that they have both come to love. 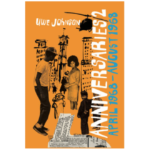 Anniversaries, Volume 2
$27.95 $
SCROLL UP
Our site uses cookies. By continuing to our site you are agreeing to our cookie privacy policy
GOT IT
Join The Waitlist We will inform you when the product is back in stock. Please leave your valid email address below.