‘Austerlitz’ by W.G. Sebald is the story of a man’s search for the answer to his life’s central riddle.

A small child when he comes to England on a Kindertransport in the summer of 1939, Jacques Austerlitz is told nothing of his real family by the Welsh Methodist minister and his wife who raise him. When he is a much older man, fleeting memories return to him, and obeying an instinct he only dimly understands, Austerlitz follows their trail back to the world he left behind a half century before. There, faced with the void at the heart of twentieth-century Europe, he struggles to rescue his heritage from oblivion.

His body of work including ‘Austerlitz’ have won a number of international awards, including the National Book Critics Circle Award, the Los Angeles Times Book Award, the Berlin Literature Prize, and the LiteraTour Nord Prize. 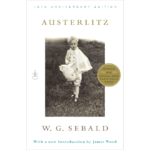 Austerlitz
$16.00 $
SCROLL UP
Our site uses cookies. By continuing to our site you are agreeing to our cookie privacy policy
GOT IT
Join The Waitlist We will inform you when the product is back in stock. Please leave your valid email address below.