C L R James, one of the foremost thinkers of the twentieth century, was devoted to the game of cricket. In this classic summation of half a lifetime spent playing, watching and writing about the sport, he recounts the story of his overriding passion and tells us of the players whom he knew and loved, exploring the game’s psychology and aesthetics, and the issues of class, race and politics that surround it.

Part memoir of a West Indian boyhood, part passionate celebration and defence of cricket as an art form, part indictment of colonialism, ‘Beyond a Boundary’ addresses not just a sport but a whole culture and asks the question, ‘What do they know of cricket who only cricket know?

C.L.R. James was born January 4, 1901, in Trinidad. In 1918 James received his teaching certificate from Queens Royal College. During the 1930s and after World War II, he covered cricket for ‘The Manchester Guardian’. In 1938 James came to the United States, but he was deported fifteen years later, during the McCarthy era. The United States government allowed James to return in 1970, and became a member of the faculty at Federal City College in Washington. Before his death on May 31, 1989, in London, C.L.R. James was awarded Trinidad and Tobago’s highest honor, the Trinity Cross. 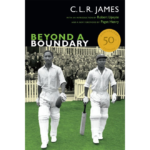