Call for the Dead

George Smiley is no one’s idea of a spy—which is perhaps why he’s such a natural. But Smiley apparently made a mistake. After a routine security interview, he concluded that the affable Samuel Fennan had nothing to hide. Why, then, did the man from the Foreign Office shoot himself in the head only hours later? Or did he?

The heart-stopping tale of intrigue that launched both novelist and spy, Call for the Dead is an essential introduction to le Carré’s chillingly amoral universe. 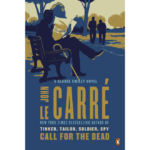