The hero of "Christine Falls", Quirke, is a surly pathologist living in 1950s Dublin. One night, after having a few drinks at a party, he returns to the morgue to find his brother-in-law tampering with the records on a young woman’s corpse. The next morning, when his hangover has worn off, Quirke reluctantly begins looking into the woman’s history. He discovers a plot that spans two continents, implicates the Catholic Church, and may just involve members of his own family. He is warned–first subtly, then with violence–to lay off, but Quirke is a stubborn man.

The first novel in the Quirke series brings all the vividness and psychological insight of John Banville’s writing to the dark, menacing atmosphere of a first-class thriller.

Benjamin Black is the pen name of acclaimed author John Banville, who was born in Wexford, Ireland, in 1945. His novels have won numerous awards, most recently the Man Booker Prize in 2005 for "The Sea" 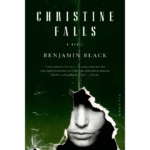