Winner of The Nobel Prize® In Literature 2003

At fifty-two, Professor David Lurie is divorced, filled with desire, but lacking in passion. When an affair with a student leaves him jobless, shunned by friends, and ridiculed by his ex-wife, he retreats to his daughter Lucy’s smallholding. David’s visit becomes an extended stay as he attempts to find meaning in his one remaining relationship. Instead, an incident of unimaginable terror and violence forces father and daughter to confront their strained relationship and the equality complicated racial complexities of the new South Africa.

J. M. Coetzee has won many literary prizes, including South Africa’s highest literary honor, the Central News Agency Literary Award, his first Booker Prize for ‘Life and Times of Michael K’ in 1983 and again for ‘Disgrace’ in1999. 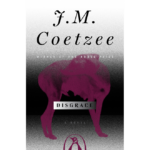 Disgrace
$16.00 $
SCROLL UP
Our site uses cookies. By continuing to our site you are agreeing to our cookie privacy policy
GOT IT
Join The Waitlist We will inform you when the product is back in stock. Please leave your valid email address below.