When a renowned Buenos Aires industrialist is found dead at his home in an exclusive gated community called La Maravillosa, the novelist Nurit Iscar (once nicknamed Betty Boo owing to a resemblance to the cartoon character Betty Boop) is contracted by a former lover, the editor of a national newspaper, to cover the story. Nurit teams up with the paper’s veteran, but now demoted, crime reporter. Soon they realize that they are falling in love, which complicates matters deliciously.

The murder is no random crime but one in a series that goes to the heart of the establishment. Five members of the Argentine industrial and political elite, who all went to the same boarding-school, have died in apparently innocent circumstances. The Maravillosa murder is just the last in the series and those in power in Argentina are not about to allow all this brought to light. Too much is at stake. 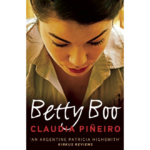