‘Go, Went, Gone’ is the masterful new novel by the acclaimed German writer Jenny Erpenbeck. One of the great contemporary European writers takes on Europe’s biggest issue. The novel tells the tale of Richard, a retired classics professor who lives in Berlin. His wife has died, and he lives a routine existence until one day he spies some African refugees staging a hunger strike in Alexanderplatz. Curiosity turns to compassion and an inner transformation, as he visits their shelter, interviews them, and becomes embroiled in their harrowing fates. Hesitantly, getting to know the new arrivals, Richard finds his life changing, as he begins to question his own sense of belonging in a city that once divided its citizens into them and us. ‘Go, Went, Gone’ is a scathing indictment of Western policy toward the European refugee crisis, but also a touching portrait of a man who finds he has more in common with the Africans than he realizes. ‘Go, Went, Gone’ addresses one of the most pivotal issues of our time, facing it head-on in a voice that is both nostalgic and frightening.

At once a passionate contribution to the debate on race, privilege and nationality and a beautifully written examination of an ageing man’s quest to find meaning in his life, 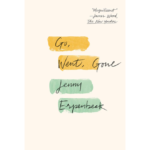