From the award-winning Mauri Kunnas, one of Finland’s most celebrated children’s writers and illustrators, a hilarious picture book full of animals, humor, and colorful pictures. Mr. Clutterbuck is blissfully unaware of his reputation as the busiest and loudest sleepwalker in town. Meek and mild-mannered when awake, at night Mr. Clutterbuck seeks thrills and adventures. Often the accidental instigator of chaos, Mr. Clutterbuck soon becomes the lead singer of a rock band, a disco king, and, eventually, the hero of his town. Goodnight Mr. Clutterbuck is sure to captivate readers of all ages as we wonder what kind of situation Mr. Clutterbuck will find himself in next. With a lively tapestry of characters, including a motorcycle gang of cats and crocodiles, a hippo in charge of a sausage factory, and an ill-tempered bull at a theme park, Mauri Kunnas playfully shows what can happen when you step outside your comfort zone.

By Mauri Kunnas
Translated from the Finnish by Jill Timbers 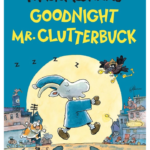