At the heart of ‘Happiness, as Such’ is an absence—an abyss that draws everyone nearer to its edge—created by the departure of a family’s wayward only son, Michele, who has fled from Italy to England, in 1970s, to escape the dangers and threats of his radical political ties. Back in Italy, his father lies dying. Michele’s departure sets forth a series of events that will bring together everyone in his life – his mother Adriana, his long-suffering sister Angelica, his loyal and sad friend Osvaldo, and Mara, a young woman who is prone to showing up on doorsteps with a baby that may or may not be Michele’s.

This novel is part epistolary: his mother writes letters to him, nagging him; his sister Angelica writes to him too; so does Mara, his former lover, who gave birth to a child who could be his own. Left to clean up Michele’s mess, his family and friends complain and commiserate, making mistakes and missteps, attempting to cope in the only ways that they know how. With a few brushstrokes, Natalia Ginzburg can flesh out an entire existence and all its pitfalls and disappointments with unmatched clarity.

The story of the Prodigal Son turned on its head, ‘Happiness, as Such’ is an immensely wise and absurdly funny novel-in-letters about complicated families and missed connections.

One of Natalia Ginzburg’s finest achievements, ‘Happiness, as Such’ is an experimental, wise, raw, comic novel, written in powerful prose that cuts to the bone with surgical precision. 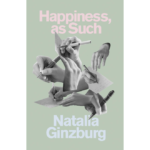