In the second installment of this acclaimed graphic novel ‘Hip Hop Family Tree – 2’ covering the early years of 1981-1983, Hip Hop has made a big transition from the parks and rec rooms to downtown clubs and vinyl records. The performers make moves to separate themselves from the paying customers by dressing more and more flamboyant until a young group called RUN-DMC comes on the scene to take things back to the streets. This volume covers hits like Afrika Bambaataa’s Planet Rock, Grandmaster Flash and the Furious Five’s the Message, the movie Wild Style and introduces superstars like NWA, The Beastie Boys, Doug E Fresh, KRS One, ICE T, and early Public Enemy. Cameos by Dolemite, LL Cool J, Notorious BIG, and New Kids on the Block (?!)! 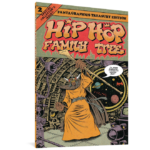