History Of The World In 100 Objects

When did people first start to wear jewelry or play music? When were cows domesticated, and why do we feed their milk to our children? Where were the first cities, and what made them succeed? Who developed math–or invented money?

The history of humanity is one of invention and innovation, as we have continually created new things to use, to admire, or leave our mark on the world. In this groundbreaking book, Neil MacGregor turns to objects that previous civilizations have left behind to paint a portrait of mankind’s evolution, focusing on unexpected turning points.

Beginning with a chopping tool from the Olduvai Gorge in Africa and ending with a recent innovation that is transforming the way we power our world, he urges us to see history as a kaleidoscope–shifting, interconnected, constantly surprising. A landmark bestseller, A History of the World in 100 Objects is one f the most unusual and engrossing history books to be published in years. 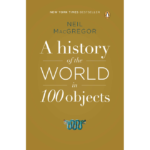