With his influential “counternovel” ‘Hopscotch’ Cortázar earned a place among the most innovative authors of the twentieth century. ‘Hopscotch’ is a nonlinear novel about an Argentinean writer living in Paris; it consists of 155 short chapters that the author advises the reader to read out of order.

Horacio Oliveira is an Argentinian writer who lives in Paris with his mistress, La Maga, surrounded by a loose-knit circle of bohemian friends who call themselves “the Club.” A child’s death and La Maga’s disappearance put an end to his life of empty pleasures and intellectual acrobatics, and prompt Oliveira to return to Buenos Aires, where he works by turns as a salesman, a keeper of a circus cat which can truly count, and an attendant in an insane asylum.

‘Hopscotch’ is the dazzling, freewheeling account of Oliveira’s astonishing adventures. 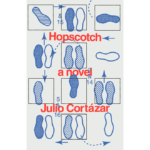 Hopscotch
$16.00 $
SCROLL UP
Our site uses cookies. By continuing to our site you are agreeing to our cookie privacy policy
GOT IT
Join The Waitlist We will inform you when the product is back in stock. Please leave your valid email address below.