Kafka On The Shore

‘Kafka on the Shore’ displays one of the world’s great storytellers at the peak of his powers.

Here we meet a teenage boy, Kafka Tamura, who is on the run, and Nakata, an aging simpleton who is drawn to Kafka for reasons that he cannot fathom. As their paths converge, acclaimed author Haruki Murakami enfolds readers in a world where cats talk, fish fall from the sky, and spirits slip out of their bodies to make love or commit murder, in what is a truly remarkable journey.

Haruki Murakami was born in Kyoto in 1949 and now lives near Tokyo. His work has been translated into more than fifty languages, and the most recent of his many international honors is the Hans Christian Andersen Literature Award. 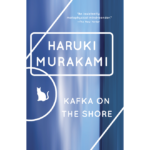