A new heirloom bean from King City, California, with a rich history and a dreamy bean broth.
It has a thin skin and a dense yet creamy interior.

King City Pinks are closer to Buckeye.
They are outstanding in their own right.
They’re dense but not stodgy.
They have a thin skin and produce a dreamy bean broth. 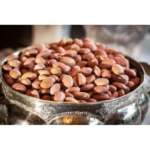 King City Pink Bean
$8.00 $
SCROLL UP
Our site uses cookies. By continuing to our site you are agreeing to our cookie privacy policy
GOT IT
Join The Waitlist We will inform you when the product is back in stock. Please leave your valid email address below.