With a career that spanned more than half a century, William Trevor is regarded as one of the best writers of short stories in the English language. Now, in ‘Last Stories’, the master storyteller delivers ten exquisitely rendered tales—nine of which have never been published in book form–that illuminate the human condition and will surely linger in the reader’s mind long after closing the book. Subtle yet powerful, Trevor gives us insights into the lives of ordinary people. We encounter a tutor and his pupil, whose lives are thrown into turmoil when they meet again years later; a young girl who discovers the mother she believed dead is alive and well; and a piano-teacher who accepts her pupil’s theft in exchange for his beautiful music.

This final and special collection is a gift to lovers of literature and Trevor’s many admirers, and affirms his place as one of the world’s greatest storytellers.

He has written many novels and short story collections and has won many prizes. In 2002 he was knighted for his services to literature. 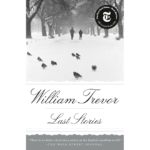 Last Stories
$16.00 $
SCROLL UP
Our site uses cookies. By continuing to our site you are agreeing to our cookie privacy policy
GOT IT
Join The Waitlist We will inform you when the product is back in stock. Please leave your valid email address below.