Jean-Paul Sartre’s first published novel, ‘Nausea’ is both an extended essay on existentialist ideals, and a profound fictional exploration of a man struggling to restore a sense of meaning to his life.

‘Nausea’ is both the story of the troubled life of an introspective historian, Antoine Roquentin, and an exposition of one of the most influential and significant philosophical attitudes of modern times – existentialism. The book chronicles his struggle with the realisation that he is an entirely free agent in a world devoid of meaning; a world in which he must find his own purpose and then take total responsibility for his choices. A seminal work of contemporary literary philosophy, ‘Nausea’ evokes and examines the dizzying angst that can come from simply trying to live.

Jean-Paul Sartre (1905-1980) was an iconoclastic French philosopher, novelist, playwright and, widely regarded as the central figure in post-war European culture and political thinking. Sartre famously refused the Nobel Prize for literature in 1964 on the grounds that ‘a writer should not allow himself to be turned into an institution’. 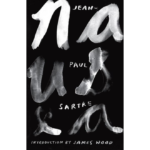