Winner of The Nobel Prize® In Literature

A thirty-one-year-old woman named Kathy narrates this haunting tale, drawing the reader gradually into her recollections of her life at Hailsham, the idyllic boarding school where she grew up. She and her best friends, Ruth and Tommy, were encouraged by their teachers to create works of art from an early age, to collect cherished objects, and to take good care of their health. There are no parents in their world, only a handful of teachers, some of whom seem to be deeply troubled by their position at the school. Kathy’s friend Ruth is bossy and manipulative, while Kathy herself is gentle and self-contained. Both are drawn to Tommy, a boy given to explosive fits of temper. What is revealed, as Kathy’s reminiscences accumulate, is a life of preparation for a special role in a world that has begun to exploit the medical possibilities of genetic technology.

A tale of deceptive simplicity, ‘Never Let Me Go’ slowly reveals an extraordinary emotional depth and resonance—and takes its place among Kazuo Ishiguro’s finest work. His novel ‘The Remains of the Day ‘ won the Booker Prize.

Kazuo Ishiguro was born in Nagasaki, Japan, in 1954 and moved to Britain at the age of five. His eight previous works of fiction have earned him many honors around the world. His work has been translated into over fifty languages, 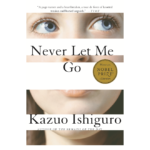 Never Let Me Go
$16.00 $
SCROLL UP
Our site uses cookies. By continuing to our site you are agreeing to our cookie privacy policy
GOT IT
Join The Waitlist We will inform you when the product is back in stock. Please leave your valid email address below.