Fran Ross was born in Philadelphia to a working class African American family. She attended Temple University on a full scholarship and subsequently worked as a journalist. She also wrote briefly for The Richard Pryor Show.

‘Oreo’, which was published in 1974 & follows the adventures of a biracial Black-Jewish girl. It is hilarious, both playful and profound. It has a section on the 3rd page of the novel called A word about weather : ‘There is no weather per se in this book. Passing reference is made to weather in a few instances. Assume whatever season you like throughout. Summer makes the most sense in a book of this length. That way, pages do not have to be used up describing people taking off and putting on overcoats”.

Oreo is raised by her maternal grandparents in Philadelphia. Her black mother tours with a theatrical troupe, and her Jewish deadbeat dad disappeared when she was an infant, leaving behind a mysterious note that triggers her quest to find him. What ensues is a playful, modernized parody of the classical odyssey of Theseus with a feminist twist, immersed in seventies pop culture, and mixing standard English, black vernacular, and Yiddish with wisecracking aplomb. Oreo, our young hero, navigates the labyrinth of sound studios and brothels and subway tunnels in Manhattan, seeking to claim her birthright while unwittingly experiencing and triggering a mythic journey of self-discovery like no other. 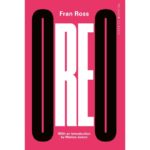 Oreo
$16.00 $
SCROLL UP
Our site uses cookies. By continuing to our site you are agreeing to our cookie privacy policy
GOT IT
Join The Waitlist We will inform you when the product is back in stock. Please leave your valid email address below.