Rashomon And Seventeen Other Stories

“Rashömon”and “In a Bamboo Grove” inspired Kurosawa’s magnificent film and depict a past in which morality is turned upside down, while tales such as “The Nose,” “O-Gin” and “Loyalty” paint a rich and imaginative picture of a medieval Japan peopled by Shoguns and priests, vagrants and peasants. And in later works such as “Death Register,” “The Life of a Stupid Man,” and “Spinning Gears,” Akutagawa drew from his own life to devastating effect, revealing his intense melancholy and terror of madness in exquisitely moving impressionistic stories.
Japan’s highest literary prize -The Akutagawa Prize is named in his honor. 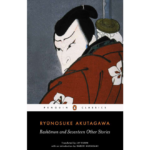 Rashomon And Seventeen Other Stories
$16.00 $