A visionary work of science fiction that introduced the word “robot”.

Written in 1920, premiered in Prague in 1921, and first performed in New York in 1922—garnered worldwide acclaim for its author and popularized the word robot. Mass-produced as efficient laborers to serve man, Capek’s Robots are an android product—they remember everything but think of nothing new. But the Utopian life they provide ultimately lacks meaning, and the humans they serve stop reproducing. When the Robots revolt, killing all but one of their masters, they must strain to learn the secret of self-duplication. It is not until two Robots fall in love and are christened “Adam” and “Eve” by the last surviving human that Nature emerges triumphant.

Karel Capek (1890–1938) was the leading Czech playwright, novelist, and columnist between the wars. He is best known for R. U. R. (Rossum’s Universal Robots) and his novel, ‘War with the Newts’. 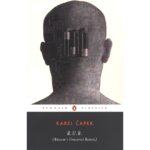 R. U. R. (Rossum's Universal Robots)
$16.00 $
SCROLL UP
Our site uses cookies. By continuing to our site you are agreeing to our cookie privacy policy
GOT IT
Join The Waitlist We will inform you when the product is back in stock. Please leave your valid email address below.