Nobel Prize winner Yasunari Kawabata’s Snow Country is widely considered to be the writer’s masterpiece: a powerful tale of wasted love set amid the desolate beauty of western Japan.

At an isolated mountain hot spring, with snow blanketing every surface, Shimamura, a wealthy dilettante meets Komako, a lowly geisha. She gives herself to him fully and without remorse, despite knowing that their passion cannot last and that the affair can have only one outcome. In chronicling the course of this doomed romance, Kawabata has created a story for the ages — a stunning novel dense in implication and exalting in its sadness.

Yasunari Kawabata was born in Osaka in 1899. In 1968 he became the first Japanese writer to receive The Nobel Prize® for Literature. 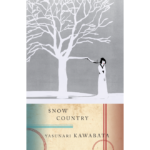 Snow Country
$16.00 $
SCROLL UP
Our site uses cookies. By continuing to our site you are agreeing to our cookie privacy policy
GOT IT
Join The Waitlist We will inform you when the product is back in stock. Please leave your valid email address below.