Winner of The Nobel Prize® In Literature in 2006.

This novel is a spellbinding story of a poet seeking his lost love in a remote Turkish town riven by religious conflict and cut off from the world by a blizzard.

After twelve years of political exile in Germany, the Turkish poet Ka returns to his native Istanbul for his mother’s funeral. There he is asked by a friend at a newspaper to travel to the remote Anatolian town of Kars to report on the municipal elections, as well as on a disturbing series of suicides by women who have been forbidden by the secular government to wear their head scarves at school.

He arrives in Kars in the midst of a snowstorm that lasts for three days, cutting the town off from the greater world, and is quickly drawn into an intricate set of circumstances. He meets his beautiful friend Ýpek, who has recently separated from her husband, and falls in love with her. He witnesses an assassination, finds himself discussing the possible existence of God with an idealistic student from the Islamic high school, is taken to a meeting with a reputed Islamic terrorist and, after four years without writing a single poem, is visited with a series of poems that arrive fully formed in his mind. While the reason for the women’s suicides remains a mystery, Ka is caught up in a theatrically staged military coup intended to punish the political Islamists whose power is on the rise in Kars.

Balancing empathy and wit, irony and pathos, ‘Snow’ illuminates the profound difficulties and contradictions of life in lands like Turkey, where western-style democracy and Islamic fundamentalism are dangerously at odds. ‘Snow’ is a riveting and important work by one of contemporary fiction’s most brilliant practitioners. 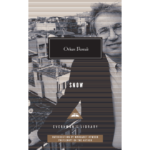