Written in the eleventh century, this exquisite portrait of courtly life in medieval Japan is widely celebrated as the world’s first novel.

Genji, the Shining Prince, is the son of an emperor. He is a passionate character whose tempestuous nature, family circumstances, love affairs, alliances, and shifting political fortunes form the core of this magnificent epic. Royall Tyler’s superior translation is detailed, poetic, and superbly true to the Japanese original while allowing the modern reader to appreciate it as a contemporary treasure.

Supplemented with detailed notes, glossaries, character lists, and chronologies to help the reader navigate the multigenerational narrative, this comprehensive edition presents this ancient tale in the grand style that it deserves.

Murasaki Shikibu, born in 978, was a member of Japan’s Fujiwara clan. Lady Murasaki’s rare literary talent, particularly her skill as a poet, secured her a place in the court of Empress Akiko. After the death of her husband, she cloistered herself to study Buddhism, raise her daughter, and write the world’s first novel Genji Monogatari, the tale of the shining Prince Genji. 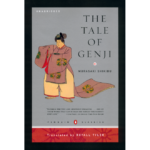