In ‘The Age of Empire (1875 – 1914)’ Erica Hobsbawm discusses the evolution of European economics, politics, arts, sciences, and cultural life from the height of the industrial revolution to the First World War. Hobsbawm combines vast erudition with a graceful prose style to re-create the epoch that laid the basis for the twentieth century. 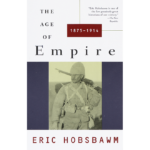