When Pushkin first read some of the stories in this collection, he declared himself "amazed." "Here is real gaiety," he wrote, "honest, unconstrained, without mincing, without primness. And in places what poetry! . . . I still haven’t recovered."

More than a century and a half later, Nikolai Gogol’s stories continue to delight readers the world over. Collected here are Gogol’s finest tales—stories that combine the wide-eyed, credulous imagination of the peasant with the sardonic social criticism of the city dweller—allowing readers to experience anew the unmistakable genius of a writer who paved the way for Dostoevsky and Kafka.

All of Gogol’s most memorable creations are here: the minor official who misplaces his nose, the downtrodden clerk whose life is changed by the acquisition of a splendid new overcoat, the wily madman who becomes convinced that a dog can tell him everything he needs to know. The wholly unique blend of the mundane and the supernatural that Gogol crafted established his reputation as one of the most daring and inventive writers of his time. 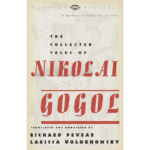