The Frog In The Well

By Caldecott Medal winners Alvin Tresselt and Roger Duvoisin, ‘The Frog in the Well’ is the charming tale of a brave frog who beats his fears and explores the world

Once upon a time there was a frog who lived at the bottom of a well. The well was the frog’s whole world, until the day the well ran dry and the bugs began to disappear. What was happening to the world, the frog wondered, and what could he do? The hungry frog decided he must hop to the top of the well to see what he could of the end of the world. Conquering his fear, he peered out, and what did he see? Trees, flowers, meadows, marshes, and all kinds of end-of-the-world creatures! Entranced, the little frog ventured forth to find out more about the world outside his own.

Based on a classic Chinese fable, and written and illustrated by the Caldecott-winning Alvin Tresselt and Roger Duvoisin, ‘The Frog in the Well’ is a charming tale of one brave frog and his journey into wisdom. 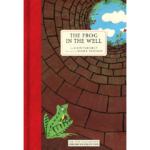