Winner of The Nobel Prize® In Literature in 1947.

First published in 1902 and immediately assailed for its themes of omnisexual abandon and perverse aestheticism, ‘The Immoralist’ is the novel that launched André Gide’s reputation as one of France’s most audacious literary stylists, a groundbreaking work that opens the door onto a universe of unfettered impulse whose possibilities still seem exhilarating and shocking.

Gide’s protagonist is the frail, scholarly Michel, who, shortly after his wedding, nearly dies of tuberculosis. He recovers only through the ministrations of his wife, Marceline, and his sudden, ruthless determination to live a life unencumbered by God or values. What ensues is a wild flight into the realm of the senses that culminates in a remote outpost in the Sahara—where Michel’s hunger for new experiences at any cost bears lethal consequences. 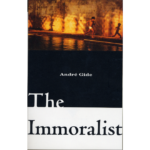