Set in the 1860s, ‘The Leopard’ tells the spellbinding story of a decadent, dying Sicilian aristocracy threatened by the approaching forces of democracy and revolution.

The Sicilian prince, Don Fabrizio, hero of Lampedusa’s great and only novel, is described as enormous in size, in intellect, and in sensuality. The book he inhabits shares his dimensions in its evocation of an aristocracy confronting democratic upheaval and the new force of nationalism.

Although Giuseppe di Lampedusa had long had the book in mind, he began writing it only in his late fifties; he died at age sixty, soon after the manuscript was rejected as unpublishable. In his introduction, Gioacchino Lanza Tomasi, Lampedusa’s nephew, gives us a detailed history of the initial publication and the various editions that followed. And he includes passages Lampedusa wrote for the book that were omitted by the original Italian editors. In the decades since its publication, ‘The Leopard’ has come to be regarded as the twentieth century’s greatest historical fiction. 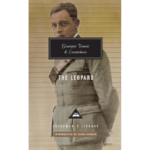