The Life and Opinions of Tristram Shandy, GentlemanLavanyaFebruary 19, 2021January 18, 2023

The Life and Opinions of Tristram Shandy, Gentleman

Endlessly digressive, boundlessly imaginative and unmatched in its absurd and timeless wit.

This bawdy, high-spirited novel—whose author, Laurence Sterne, was described by Diderot as “the Rabelais of the English”—provoked a literary scandal when its first two volumes were published in 1759. A masterpiece of narrative absurdity, ribald humor, and philosophical playfulness, ‘Tristram Shandy’ is famously studded with witty metafictional gambits—chapters out of order, blank and blacked-out pages, a preface that occurs in the middle of the book—that prefigured postmodernism by two centuries.

Tristram Shandy, the hero of this fictional autobiography, purports to narrate the story of his life, but along the way he engages in so many colorful digressions and exuberant jokes that his birth does not even occur until Volume III. In the meantime, we meet an unforgettable supporting cast of characters—including Shandy’s father and mother, his uncle Toby, the servant Trim, Dr. Slop, and Parson Yorick—whose whimsical obsessions, domestic conflicts, and disastrous mishaps form the fabric of this genre-defying tour de force. With its lively exploration of both the logical limitations and the wildest possibilities of fiction, ‘Tristram Shandy’ has earned its reputation as one of the greatest comic novels in English literature. 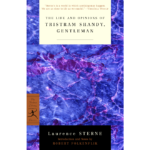 The Life and Opinions of Tristram Shandy, Gentleman
$16.00 $
SCROLL UP
Our site uses cookies. By continuing to our site you are agreeing to our cookie privacy policy
GOT IT
Join The Waitlist We will inform you when the product is back in stock. Please leave your valid email address below.