“The first time I laid eyes on Terry Lennox he was drunk in a Rolls-Royce Silver Wraith outside the terrace of The Dancers”. Marlowe explains in an extraordinary opening line that establishes wealth, trouble, and the central figure of conflict in the story. Taking pity on Lennox, Marlowe brings him home to sober up. They begin a casual friendship, meeting for gimlets at Victor’s; Marlowe learns that the scars on his face are mortar wounds and that he is married to the promiscuous daughter of multimillionaire Harlan Potter. Something in Lennox’s character interests Marlowe, enough that he doesn’t question why Lennox is asking for help getting to Mexico right after his wife has been brutally murdered. Marlowe does help, and is arrested and jailed. When Lennox turns up a suicide with a signed confession in Otatoclán, it gets Marlowe out of jail, but it does not get Lennox out of his life.

Gangsters, writers, publishers, quacks, and, of course, beautiful women enter Marlowe’s life after Lennox’s suicide, but not all meet on a trail readily connected to the solution of Sylvia Lennox’s murder. Nor is it so apparent that Marlowe seeks to vindicate his dead friend, either. All we know is that Marlowe does not believe the Terry Lennox he knew was capable of such a vicious crime. The brief friendship has struck a sympathetic chord in him.

In the hard-boiled world, no detective would ever give voice to feelings like these, and Marlowe doesn’t. But such is the power and subtlety of Raymond Chandler’s writing that we are always conscious of his central character’s deep well of loyalty at work, driving this longest of goodbyes. 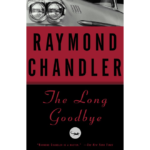 The Long Goodbye
$16.00 $
SCROLL UP
Our site uses cookies. By continuing to our site you are agreeing to our cookie privacy policy
GOT IT
Join The Waitlist We will inform you when the product is back in stock. Please leave your valid email address below.