The Lost Honor Of Katharina Blum

Winner of The Nobel Prize® In Literature 1972

Heinrich Böll’s powerful novel about a woman terrorized by the media.

In an era in which journalists will stop at nothing to break a story, Henrich Böll’s ‘The Lost Honor of Katharina Blum’ has taken on heightened relevance. A young woman’s association with a hunted man makes her the target of a journalist determined to grab headlines by portraying her as an evil woman. As the attacks on her escalate and she becomes the victim of anonymous threats, Katharina sees only one way out of her nightmare.

Turning the mystery genre on its head, the novel begins with the confession of a crime, drawing the reader into a web of sensationalism, character assassination, and the unavoidable eruption of violence.

Heinrich Boll was the first German to win the Nobel Prize for literature since Thomas Mann in 1929. 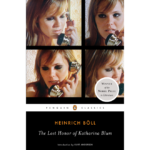