The Name Of The Rose

Set in 1327 during the Middle Ages, The Name Of The Rose (Vintage Classics) is a timeless classic that opens a mystery. The Franciscans in a wealthy Italian abbey are suspected of heresy. Brother Williams of Baskerville is called in to investigate. His mission is blurred by a series of seven mysterious deaths that follow the pattern described in the book of Revelation. Brother Williams dons the role of a detective and follows the trail of a conspiracy. He comes face to face with the abbey’s labyrinthine secrets, subversive effects of laughter and medieval inquisition. He collects evidence and deciphers secret symbols and coded manuscripts. While he attempts to uncover the extraordinary happenings taking place in the abbey at night, he is caught in a power struggle between the Emperor and the Pope. His investigation is blocked by an unknown force and Brother Williams must sort things out.

The book not only narrates a murder investigation but also offers an unparalleled portrait of the Medieval world, including its history, philosophy, theology and logic, which is on the brink of profound transformation. 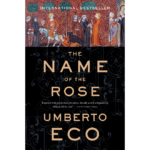