The Sailor Who Fell From Grace With The Sea

Yukio Mishima’s ‘The Sailor Who Fell from Grace With the Sea’ explores the vicious nature of youth that is sometimes mistaken for innocence.

Thirteen-year-old Noboru is a member of a gang of highly philosophical teenage boys who reject the tenets of the adult world — to them, adult life is illusory, hypocritical, and sentimental. When Noboru’s widowed mother is romanced by Ryuji, a sailor, Noboru is thrilled. He idolizes this rugged man of the sea as a hero. But his admiration soon turns to hatred, as Ryuji forsakes life onboard the ship for marriage, rejecting everything Noboru holds sacred. Upset and appalled, he and his friends respond to this apparent betrayal with a terrible ferocity. 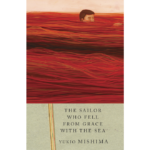