First published in Spanish in 1998, ‘The Savage Detectives’ was immediately hailed as a critical success, wining the Herralde Prize and the Romulo Gallegos Prize. But with the 2007 English-language translation the book became more than a bestseller — it began the global sensation of Bolanomania.

New Year’s Eve, 1975: Arturo Belano and Ulises Lima, founders of the visceral realist movement in poetry, leave Mexico City in a borrowed white Impala. Two hunted men leave town in a hurry, on the desert-bound trail of a vanished poet, Cesárea Tinajero. Spanning two decades and crossing continents, this remarkable quest is a journey told and shared by a generation of lovers, rebels and readers, whose testimonies are woven together into one of the most dazzling Latin American novels of the twentieth century.

A polymathic descendant of Borges and Pynchon, Roberto Bolaño traces the hidden connection between literature and violence in a world where national boundaries are fluid and death lurks in the shadow of the avant-garde. ‘The Savage Detectives’ is a dazzling original, the first great Latin American novel of the twenty-first century. 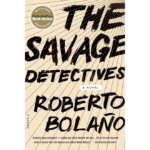