Isabel Dalhousie is fond of problems, and sometimes she becomes interested in problems that are, quite frankly, none of her business.

A highly intelligent single woman who edits a philosophy journal, she is also a person of irrepressible curiosity. So when she witnesses a young man fall to his death from the balcony of Edinburgh’s main concert hall, she sets out to discover whether he was pushed or whether, as the police have concluded, he fell. Despite the advice of her housekeeper, Grace, who has been raised in the values of traditional Edinburgh, and her niece, Cat, who, if you ask Isabel, is dating the wrong man, Isabel is determined to find the truth—if indeed there is one—behind the man’s death. Her investigation, pursued in an informal fashion, leads her into the realm of secret deals and private greed among a few members of Edinburgh’s investment-banking community. While she pursues information about the likely suspects, Isabel engages in delightfully thorny debates, with herself and others, about the possible outcomes of moral choices along the way.

Like his immensely popular series, The No. 1 Ladies’ Detective Agency, ‘The Sunday Philosophy Club’ abounds in wry humor and sharp observations of human nature. 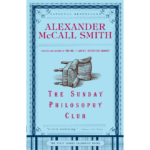