What’s in the August Book Box:

1) Percival Everett’s Erasure (Los Angeles, U.S.A) : What can we say about this brilliant book that will actually convey its brilliance?! Part satire, part skillfully restrained family saga, this novel is absurd & profound, hilarious and moving. From one of the great novelists of our time. NPR called Everett "America’s most under-recognized literary master". We agree.

2) Mercè Rodoreda’s Garden by the Sea (Barcelona, Spain): An indescribably beautiful novel that is set in the seaside near Barcelona. We could describe it as Great Gatsby meets Wuthering Heights meets Downton Abbey, but saying just that wouldn’t convey its gentle, haunting beauty. Roderoda was also a great favorite of Gabriel Garcia Marquez who said that she "had bedazzled me by the sensuality with which she reveals things in the atmosphere of her novels.The most important Catalan writers of the 20th Century. 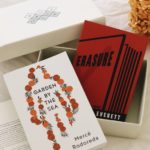