What’s in the October Book Box:

1) Elena Ferrante’s The Lying Life of Adults (italy): Ferrante’s newest release is a gripping book that follows Giovanna, as she grapples with her father’s words about her resemblance to her estranged Aunt Vittoria. Giovanna searches for her reflection in two kindred cities that fear and detest one another: Naples of the heights, which assumes a mask of refinement, and Naples of the depths, a place of excess and vulgarity. She moves from one to the other in search of the truth, but neither city seems to offer answers or escape.

2) Zakes Mda’s Madonna of Excelsior (South Africa): A beautiful book that encompasses the apartheid era when the Immortality Act was passed, as well as the post-apartheid period. Niki, the fallen madonna, transgresses boundaries for the sake of love; her choices have repercussions in the lives of her black son and mixed-race daughter, who come of age in post-apartheid South Africa, where freedom prompts them to reexamine their country’s troubled history at first hand.By turns earthy, witty, and tragic, The Madonna of Excelsior is a brilliant depiction of life in South Africa and of the dramatic changes between the 1970s and the present.

Based on an original drawing by Jane Mount. She says: "With the Book Pins, I’m trying to capture the essence of a book in less than an inch square."

This badge is a hard enamel lapel pin with raised gold-plated outlines. It’s about 1 inch tall by 0.75 inches wide, and attaches to your clothing with a black rubber clutch. It ships pinned to a small cardboard plaque in a cellophane envelope. 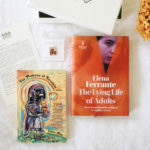