More than four decades after he took a razor blade to an eyeball and shocked the world with Un chien andalou, arch-iconoclast Luis Buñuel capped his astonishing career with three final provocations—The Discreet Charm of the Bourgeoisie, The Phantom of Liberty, and That Obscure Object of Desire—in which his renegade, free-associating surrealism reached its audacious, self-detonating endgame. Working with such key collaborators as screenwriter Jean-Claude Carrière and his own frequent on-screen alter ego Fernando Rey, Buñuel laced his scathing attacks on religion, class pretension, and moral hypocrisy with savage violence to create a trio of subversive, brutally funny masterpieces that explore the absurd randomness of existence. Among the director’s most radical works as well as some of his greatest international triumphs, these films cemented his legacy as cinema’s most incendiary revolutionary. 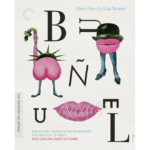