Za’atar is a blend named after its key ingredient, a Levantine species of oregano that flourishes in the region’s characteristic arid conditions, and it also includes sesame seeds, sumac and other ingredients, depending on who’s making it. Good za’atar tastes savory, deeply herbal, piney, nutty, tart and peppery. 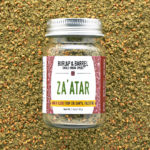 Za'atar
$9.99 $
SCROLL UP
Our site uses cookies. By continuing to our site you are agreeing to our cookie privacy policy
GOT IT
Join The Waitlist We will inform you when the product is back in stock. Please leave your valid email address below.