All About My Mother | Criterion Collection

This Oscar-winning melodrama, one of Pedro Almodóvar’s most beloved films, provides a dizzying, moving exploration of the meaning of motherhood. In an instant, nurse Manuela (Cecilia Roth) loses the teenage son she raised on her own. Grief-stricken, she sets out to search for the boy’s long-lost father in Barcelona, where she reawakens into a new maternal role, at the head of a surrogate family that includes a pregnant, HIV-positive nun (Penélope Cruz); an illustrious star of the stage (Marisa Paredes); and a transgender sex worker (Antonia San Juan). Beautifully performed and bursting with cinematic references, All About My Mother is a vibrant tribute to female fortitude, a one-of-a-kind family portrait, and a work of boundless compassion. 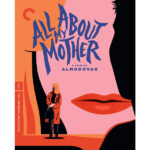