Juan Hormiga, the greatest storyteller of his entire anthill, loves to recount his fearless grandfather’s adventures. When Juan and his fellow ants gather around for story time, he hypnotizes all with tales of his grandfather’s many exploits – including his escape from an eagle’s talons and the time he leapt from a tree with just a leaf for a parachute. When he’s through telling these tales, Juan loves to cozy up for a nice long nap. He’s such a serious napper that he takes up to ten siestas every day! Though well loved by his ant friends, Juan decides telling tales and sleeping aren’t quite enough for him – it’s time to set off on his own adventure. With whimsical, irresistible illustrations, Juan Hormiga affirms the joys of sharing stories, and of creating your own out in the world.

By Gustavo Roldán
Translated from the Spanish by Robert Croll 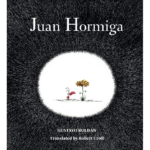 Juan Hormiga
$22.00 $
SCROLL UP
Our site uses cookies. By continuing to our site you are agreeing to our cookie privacy policy
GOT IT
Join The Waitlist We will inform you when the product is back in stock. Please leave your valid email address below.