In 1977, German director Rainer Werner Fassbinder was thirty-two years old and had already directed more than twenty-five feature films. That summer, he embarked on a project to trace the postwar history of West Germany in a series of ﬁlms told from the perspectives of three remarkable women. Fassbinder’s The Marriage of Maria Braun, Veronika Voss, and Lola—The BRD Trilogy, which takes its title from the Bundesrepublik Deutschland—would garner him his greatest commercial success, both at home and abroad, and cement his position as one of the foremost figures of the New German Cinema. 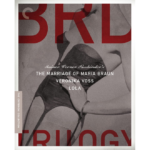