An urgent response to the political realities of con­­tem­porary Britain, this bracing drama from celebrated filmmaker Ken Loach takes a hard look at bureaucratic injustice and ineptitude through the eyes of an unassuming working-class hero. After a heart attack leaves him unable to hold a job, the widowed carpenter Daniel Blake (Dave Johns) begins a long, lonely journey through the Kafkaesque labyrinth of the local welfare state. Along the way, he strikes up a friendship with a single mother (Hayley Squires) and her two children, at the mercy of the same system after being evicted from their home. Imbued with gentle humor and quiet rage and conceived for maximum real-world impact, the Palme d’Or–winning I, Daniel Blake is a testament to Loach’s tireless commitment to a cinema of social engagement.

– 2K digital transfer, supervised by director Ken Loach, with 5.1 surround DTS-HD Master Audio soundtrack on the Blu-ray
– Audio commentary from 2016 featuring Loach and screenwriter Paul Laverty
– How to Make a Ken Loach Film, a 2016 documentary on the production of I, Daniel Blake
– Versus: The Life and Films of Ken Loach, a 2016 documentary directed by Louise Osmond
– Deleted scenes
– Trailer
– English subtitles for the deaf and hard of hearing
– PLUS: An essay by critic Girish Shambu
– New cover by Adam Maida 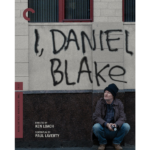