The biggest hit from the most popular Italian filmmaker of all time, La dolce vita rocketed Federico Fellini to international mainstream success—ironically, by offering a damning critique of the culture of stardom. A look at the darkness beneath the seductive lifestyles of Rome’s rich and glamorous, the film follows a notorious celebrity journalist (a sublimely cool Marcello Mastroianni) during a hectic week spent on the peripheries of the spotlight. This mordant picture was an incisive commentary on the deepening decadence of contemporary Europe, and it provided a prescient glimpse of just how gossip- and fame-obsessed our society would become

– New 4K digital restoration by The Film Foundation, with uncompressed monaural soundtrack on the Blu-ray
– New interview with filmmaker Lina Wertmüller, an assistant director on the film
– New interview with scholar David Forgacs about the period in Italian history when the film was made
– New interview with Italian journalist Antonello Sarno
– Interview with director Federico Fellini from 1965
– Audio interview with actor Marcello Mastroianni from the early 1960s
– Felliniana, a presentation of La dolce vita ephemera from the collection of Don Young
– New visual essay by filmmaker : : kogonada
– PLUS: An essay by critic Gary Giddins
– Cover by Eric Skillman 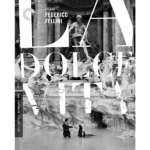